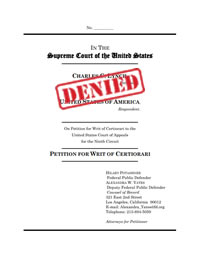 Free Federal Public Defenders called and said the Supreme Court denied hearing Lynch vs USA. Lynch lost his Appeal to the 9th Circuit and Supreme Court Denied Hearing case. Lynch maintained his innocence on count 1 and following State Law on counts 2-5. Lynch did win a McIntosh hearing based on the Section 538 Appropriations rider but hope of the truth being part of the record will forever be lost.

"This is a miscarriage of Justice out of my hands. In America a man can be convicted of mandatory minimum crimes he did not commit. Pat Hedges is a liar and a crook who fabricated the fake Baxter Conspiracy I was convicted of in Federal Court. Federal Prosecutors are either gullible fools or part of the Pat Hedges conspiracy to frame me for crimes I did not commit. I did not send Abe Baxter to sell on the Street."

Free Federal Public Defenders file Reply in Lynch vs USA asking Supreme Court to hear the case. The briefs will be distributed to the Justices tomorrow, and they will hold a conference to decide whether to accept the case (as well as many other cases) on June 13. We should learn the Court’s decision on June 17, or later if the Court needs additional time to consider the petition.

"Almost no criminal cases go to trial these days. On those rare occasions when they do, courts should jealously protect the jury’s historic duty to decide the defendant’s guilt or innocence, and to issue a verdict on behalf of the community. That didn’t happen when Petitioner Charles Lynch defended himself against federal marijuana charges."

"After a prospective juror balked at the idea of convicting Lynch for running a state-legal medical marijuana dispensary, the trial judge issued an anti-nullification instruction that effectively threatened punishment if jurors disobeyed, and polled each juror individually to ensure none would."

"Lynch could have prevailed at trial nonetheless, for he had a defense to the charges: a federal Drug Enforcement Administration official had told him that the legality of his proposed dispensary was a matter of local law."

"Though college-educated, Petitioner had no legal training, and struggled to understand how federal law seemed to criminalize marijuana, while California openly embraced medical marijuana. He studied the conflicting laws as best he could, and tentatively concluded that the Tenth Amendment reserved to the States authority to legalize medical marijuana. How else to explain the hundreds of dispensaries operating in plain sight? Petitioner’s call to the DEA confirmed the apparent correctness of that understanding, which he then included on dispensary forms."

"The Ninth Circuit issued a final judgment affirming Petitioner’s conviction. Lynch, 903 F.3d at 1087. Short of habeas relief, no alternatives remain for overturning that conviction beyond this petition for certiorari."

May 15,2019 Government files Opposition in Lynch vs USA

The prospective juror responded: “You finally said something I can relate to. I understand that completely. I believe there is something called jury nullification, that if you believe * * * the law is wrong * * * you don’t have to convict a person. That’s it.”

"At a minimum, it was unreasonable for petitioner to proceed to run a multi-million dollar marijuana business based on a short, non-specific conversation with a DEA employee whose name and position he did not know (or at least failed to record), without even attempting to follow up or seek more detailed guidance."

"Finally, the petition should be denied because the case comes to the Court in an interlocutory posture. This Court “generally await[s] final judgment in the lower courts before exercising [its] certiorari jurisdiction.”...In addition to remanding for resentencing, the court of appeals also instructed the district court to address on remand petitioner’s argument regarding the appropriations rider."

Cato’s concern in this case is ensuring that coercive anti-nullification jury instructions are not so coercive as to destroy the notion of jury independence and further erode the participation of citizen juries in the criminal justice system.

Mr. Lynch’s case perfectly illustrates why jury independence is both a necessary and a proper feature of our criminal justice system. Even assuming Lynch’s prosecution and conviction were technically lawful, they were manifestly unjust.

With consent of Matthew Guarnieri counsel for the US...

the corrected petition updates references and citations to US vs Dougherty, to reflect the correct case name and circuit court, and does not include any other changes.

Solicitor General of the United States, Noel J. Francisco, has filed for an Extension in Lynch vs USA. Click the link button below to see the request on the Supreme Court's page.

Lynch vs USA
The questions presented are:
1. May a trial judge issue a coercive anti-nullification instruction to criminal jurors?
2. May a federal defendant present an entrapment-by-estoppel defense based on implicit government assurances that his conduct is legal, as this Court and the Second, Third, and Fourth Circuits have held, or must the assurances be express, as the Ninth Circuit held in Petitioner’s case?