Man was I mad to realize that I had to wake up on the fourth of July, 'Independance Day', and go drug test. I was so upset. This is not the America I grew up in and was taught about as a child. I just can't get over how angry, upset and sad I am. Later that night I could see the fireworks from my house but was totally disenchanted.  I ended up going out for a while but am having a hard time getting this chip, no wait wood block, no how about a Redwood Tree off of my shoulder. 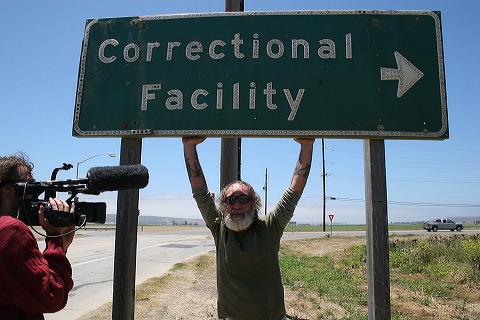 Today Eddy Lepp called me at about 10:30am and said they were getting ready to pass through Pismo Beach. I hopped into my car and caught up with them on the freeway and followed them to Lompoc. There was a traffic jam on the way down and I figured that in Eddy's mind there was probably no big rush as he was on his way to serve a 10 year mandatory sentence in Federal Prison for growing Marijuana. Eddy had a farm where he was growing over 25,000 plants or more when he was raided by the DEA in 2004. The feds prosecuted Eddy in Federal Court and he was convicted of growing more that 1000 marijuana plants which has a 10 year mandatory minimum sentence. Eddy tried claiming medical and religious protections but the arguments were not allowed in Federal Court. In the picture above, once we got to Lompoc we pulled over for a photo opp under the signs pointing to the Prison. It was a sad moment as Eddy his wife and followers realized he was only minutes from a long sentence in Federal Prison. 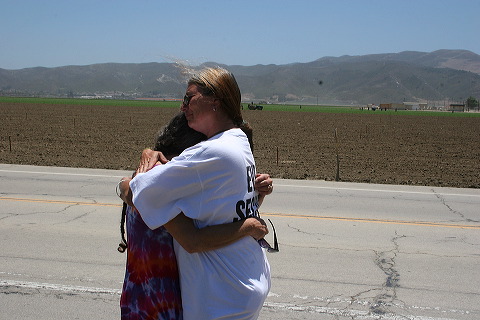 I was angered to think that Eddy was being taken from his family for Marijuana. Eddy and his followers were a classic hippie family. They were dressed in tie die outfits and many of them had tattoos of marijuana leafs. Some of his followers talked about some strong religious beliefs they had and how the Clan of Mothers were mad now for taking Papa and that the evil powers to be were about to be summoned to divine courts for their crimes. It was here I understood the importance of freedom of religion. Although I might not have had the same beliefs as Eddy and his followers, I thought how people have to 'tolerate' other peoples beliefs even if you don't understand what they are talking about. In the picture above Eddy's wife is comforted by the Minister of his church. 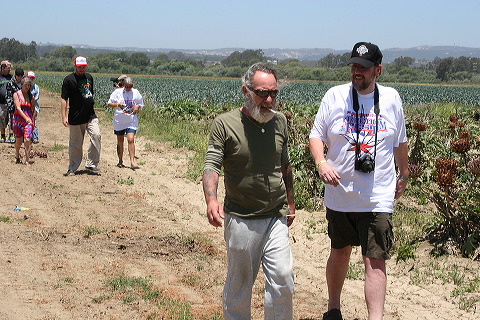 So Eddy with swollen eyes from years of battling the Federal Government and a strong conviction that he had done the right thing hopped into the van for his final ride as a free man. During the final mile Eddy stated that he was not afraid of jail as his camera man and followers listened in great admiration and sorrow. They passed around one more cigarette of the sacred herb and Eddy drank a Dr. Pepper as his camera man took Eddy's testimony. I fought back tears as other grown men cried in sorrow. I asked Eddy about his release on bail pending appeal and he said the judge didn't even read the motion and denied it. I realized at this point I was a lucky man as I am out on bail pending appeal for a one year sentence for 'marijuana crimes'. 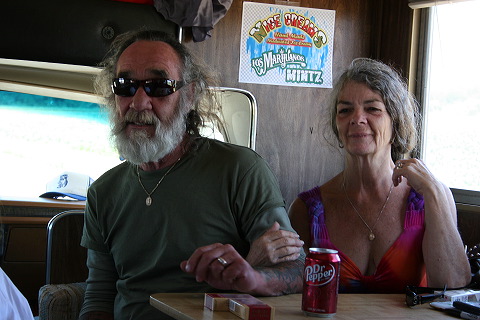 As we drove up to the penitentiary I just couldn't stop thinking how wrong this is to put people away and to break up families for marijuana. It just seemed so cruel to take Eddy from his wife, his friends, his followers and from society. They were not hurting anybody, they are just living the kind of life that makes them happy the kind of life that millions of Americans live on a daily basis. As we walked Eddy into the building my internal outrage boiled quietly as the self righteous Federal Agents did their jobs, as did the Nazi Prison Camp Guards, and took Eddy into custody and told everybody to leave. As we left the American POW camp I couldn't stop thinking what a cruel nation America can be to it's 'Marijuanan American' citizens. In an odd way I felt lucky that the judge in my case applied the safety valve to me to circumvent the 5 year mandatory minimum I was facing, that I only got one year and one day and that I was out on bail pending appeal. I was really lucky compared to what was happening to Eddy Lepp. 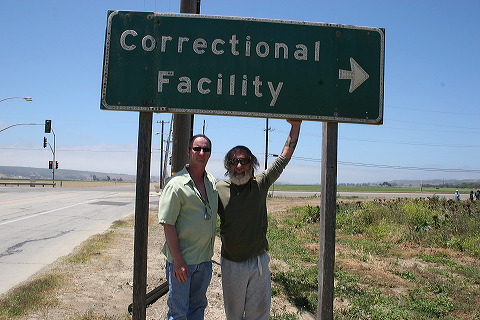 Two men, separate lives, separate life styles, separate beliefs, separate destinies but one common cause. Eddy whispered to me as he held back his emotions 'keep the message alive'.

Today I  called Eddy Lepp just to wish him the best and he told me that he had '10 hours left' before having to self surrender to the Federal Penitentary in Lompoc California. I told him that I was only 50 miles from Lompoc and would join the procession down if he called me as they were passing through Pismo Beach. He said he would call.

Today Lynch's Federal Public Defenders filed a notice of appeal. Charles Lynch is out on bail pending appeal. During sentencing Judge Wu mentioned that he thought there were grounds for appeal but did not elaborate on the matter. One comedian was quoted as saying that Prosecutors in the case are on vacation at Catalina Island on a baby seal clubbing expedition.

Went to THC Expo at the Los Angeles Convention Center. Was pretty crowded people lined up to get in and paid ten dollars to get in. Once inside there were a variety of booths from Dispensaries, Doctors Rec's, bongs and pipes, grow equipment, magazines, hemp and activist groups. I saw Tommy Chong so went and talked to him. He said that he had heard about my case and he talked to me for about 5 minutes as a line formed behind me. I ended up giving Tommy my card and asked him to give me a call sometime. Also was good to see Mickey Martin, he had on his ankle bracelet and had a judges order to attend the event. Pretty funny right next door they had the LA Erotica show. Outside of the convention center there was a huge sign that said LA Erotica, but there was no sign for the THC expo. Was great to see that all these 'dangerous' pot smokers could get into the same room without a bunch of mayhem. Made me sad to think that there w ere over six hundred dispensaries in Los Angeles and not a single one in the County I live in, and to top that off that I was one of the biggest criminals in the building. I was there with Cheryl and her family and we walked through the entire expo. Many people recognized me and came up and thanked me for putting up a fight against the unjust laws of the Federal Government regarding medical marijuana. Forgot to bring my camera so didn't have any photos of the event. Decided that since I was there I went ahead and checked out the Erotica Expo next door.